HIALEAH, Fla. – According to the Florida Department of Health numbers, Hialeah has the second highest positive coronavirus from test results in the state of Florida.

With the number of cases continuing to be on the rise, Hialeah’s fire department wanted to find out which of its firefighters have been exposed and which have not. The department secured rapid antibody testing through the University of Miami. Researchers from the university were helping to administer the tests at Fire Station No. 7.

David Rodriguez, District Chief, Hialeah Fire Department, believes the effort may be the first of its kind as about 230 firefighters will be tested.

“We’re probably one of the first in the country, maybe even the nation,” said Rodriguez. “We’re trying to do this to get an idea, to get a baseline, of the health of our firefighters.”

The test will determine if any of the firefighters have been exposed to COVID-19, and, if so, if any have immunity.

“It’s kind of giving an idea of, throughout the whole fire department, what we’re dealing with. Some people don’t feel any symptoms whatsoever. Some people could have it, some may not,” said Rodriguez.

Of the 146 firefighters tested so far since Wednesday, officials said seven have been positive for antibodies and are now isolated while awaiting the results of a swab test to find out if they are still infected.

The tests take only seconds to administer involving a simple prick of the finger with results coming back in 10 to 15 minutes. 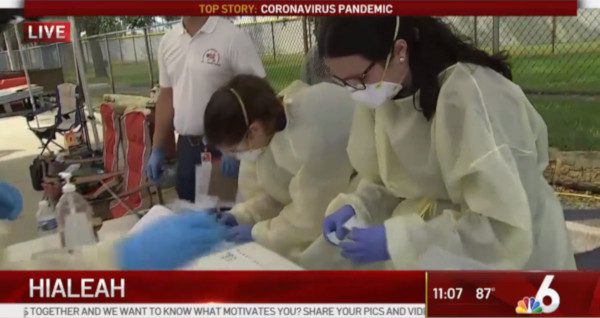 Originally published at NBCmiami.com on April 16, 2020

A firefighter’s union in Miami-Dade County has secured rapid testing for its members amid the ongoing coronavirus pandemic with the information being used for a study by the University of Miami.

Hialeah Firefighters Local Union 1102 will provide the testing for its members on Thursday, following up by giving the results for an epidemiological study being done by the school.

Fire Department Chief David Rodriguez will be among the members being tested Thursday.

HOW TO GET HARVEY

Please fill out the form below and our staff will be happy to answer any questions you have about our products.